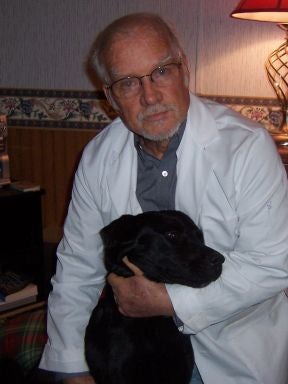 So this old guy badly in need of a kidney transplant came into my life in the fall of 2007. He had no South Carolina veterinary license, having retired in Colorado. We were friends at first sight. He totally “got” me, understood what I was going through. I was suffering from a severe case of advanced veterinary loneliness, a deep sense of professional isolation that had come from practicing mostly alone for what was 22 years at the time.
****
He had to go to dialysis three days a week, and he was so smart it was frightening. He had a gift for endocrinology, and in spite of having lost the sight in one eye from diabetes complications—he was a savant at reading radiographs (x-rays).
****
In his 70’s, he studied and studied and studied to take the SC State Board exam (I’m betting he aced it) and became my part-time associate vet.
****
Along the way, he argued with the staff, ate everything he could get his hands on and psychoanalyzed me. It was he who pointed out that my employees and I had been working together for so long without the benefit of cross-pollination with other clinics that we had developed our own language.
****
On any given day, he could tell a joke, diagnose a tough case, keep me cheered up, give his Christian testimony and show that he was forever in love and in awe of his wife Nanci.
****
He became like my big brother. He went through kidney transplant and came back to work part time while simultaneously painting a scene of John the Baptist baptizing Jesus in the River Jordan for his church’s baptistry. And he grew organic vegetables on the side.
****
Bill was a big deal of a an amateur tennis player, a highly regarded vet in Denver, a painter, a gardener, a Christian with a twinkle in his eye, a husband to Nanci and a father to his children…and he was my friend.
****
Rest well, Bill Suro, VMD. You done good.


For general information, questions, appointment requests, call us at: